I won’t lie. My kid like to exercise as much as the Kardashian girls like to wear clothing. But never the less, it’s needed. I have no grand illusion that exercise is going to rid my kid of any particular vocal or physical tic, but it absolutely makes a difference in his mental energy.

For the past nine months he’s taken a tennis class at the local park. It’s once a week only but there’s nothing more hilarious than watching a bunch of tween nerdy boys running around the court banging balls at each others’heads. I mean… it’s excellent exercise and great at controlling Dopamine production!

Every day but Fridays we walk to school. It’s as much about talking as it is about the walking. Given he’s now 13 (oy, can’t believe it) I’ll take all the bonding time I can get.

A few weeks ago, after our local city holiday parade, my daughter stayed with my husband to do some cleanup for the Kiwanis club. My son and I walked the whole three miles home. Despite some pretty steady vocal tics on his part, it was hard for me to worry about it or be frustrated. The sights of the floats, the sounds of Christmas music blaring through the radios of the viewers, the many dogs and babies waddling through the crowd… it made me happy to be alive.

Him: “Mom, I really want a new Nintendo DS for Christmas.”

Me: “Why? You already have a computer and a tablet.”

Him: “You already have a bunch of coffee cups, but it doesn’t mean you can’t enjoy another one, right?”

Me: “Yes, but my hobby is a lot less expensive than yours.”

Him: “True, dat. But come on, Mom, don’t you ever want something just because it’s awesome and fun and you can’t wait to get your hands around it?”

Me: I wanted to shout, “Yes, it’s called you! Stop growing so fast!” Instead I went with, “Yeah. Yeah I have.”

And then he slipped his hand in mine. For the next mile we walked side by side, our fingers entwined. With his head at my shoulder, I can already tell he’ll surpass me by summer. I took it in… every step… and thanked God for him. For the walks. For everything.

And right there I made a commitment to have joy and gratitude in 2016 no matter what. So far, I haven’t missed a day of good old fashioned positive thinking. That’s exercise I could get used to. 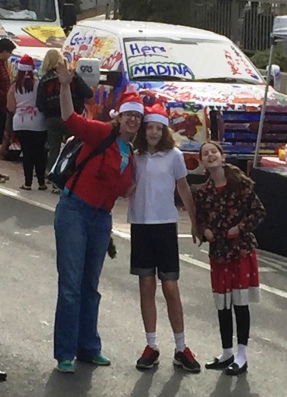 PS: And as life would have it – the moment I decided to stop living in my comfort zone (fear and worry) the tics went away. The reason? TAURINE. More later. (Tics down from even last post!)