Any of you Wicked fans out there will understand my title. Pip and I took in the show a few weeks back and, as luck would have it, she had to go to the bathroom right when this song started. Turns out there was a monitor near the concession stand. As Pip munched on her leftover Starbursts, we watched the scene from an empty foyer. When the applause started up, we quickly scurried back to our seats.

It’s always fun to watch conflict from the comfort of a theater seat – likely because you know it’s going to work out in the end. Real life isn’t as easy. Tonight was no exception.

As Stink and I were walking our dog around the neighborhood, we started talking about school. Instead of just asking, “Hey, how is class?” as I used to do, I asked him a question that would require more than a one word answer. This is my new ploy to get my hormonal tween to stay connected to me. It’s a clever tactic, and so far it’s working.

While often I get a sentence out from him, tonight I got twenty minutes of chatter. On one hand, I’m relieved my kid is still willing to communicate with me. On the other hand, it’s not as much fun as watching Glinda and Elphaba banter on stage. Perhaps if there was an orchestra and lyrics by Stephen Schwartz, my heart would be less likely to break in a million pieces. Since that wasn’t the case, I had to listen to like a grown up and not say much. After all, a blubbering, defensive mother would hardly encourage my kid to continue to confide in me.

Here’s the gist of the conversation.

Me: Who do you play with the most at school these days?

Him: I play with A, B and C. I used to play with J, K and L but now they kind of do their own thing.

Me: It’s normal to drift, huh?

Him: I guess. But actually, I’m thinking it’s because I’m not really that popular.

Him: I don’t know. I guess… you know… because I’m kind of considered the odd one.

Him: I don’t know. I can just tell. When other kids make a joke, people laugh. When I make a joke – which I like to do because I’m really funny – the kids laugh kind of weird. Not at me – don’t worry…

Me: I’m not worried!

Him: Just, well, they kind of laugh that laugh that seems to say, ‘He’s not really that funny.’

Me: And that makes you feel bad?

Me: (Heart sinking into a million pieces) Well, that’s not really great. I mean, it’s no fun when people aren’t that nice.

Him: It’s not that they mean to be like that. I’m thinking that it’s because I’m not really that popular.

And we’re back at the beginning again. I try a new approach.

Me: Is it really that important to you to be popular?

I consider launching into a spiritual direction about how God doesn’t care about popular. He cares about us as people. But I was in sixth grade once. I remember only too well how much I wanted to be part of an “in” crowd. Instead of bolstering him with words that will fall flat, I say nothing. That worked out well, as he kept talking.

Him: I am looking forward to high school… where I can start over and not be at school with the same kids. Then I have a chance at it.

Him: AT BEING POPULAR MOM!

Me: Ah ha! Well, good luck with that! For what it’s worth, I wouldn’t get your hopes up. Lord knows that I was not popular in high school. I tried, but it didn’t really work out.

Him: What did you do?

Him: (Arms crossed in ‘you’re such a dip shit’ bravado) I just want to do the opposite so I don’t make the same mistake as you.

Me: Got it. (I run my fingers through his mop of hair.) Dude, is it possible you’re not popular because you have hair like a Muppet, wear mesh shorts in 60 degree weather and wear shoes that are only hip in the hole-in-the-toe homeless crowd?

Him: Moooooom. No one should have to dress like everyone else to be popular.

Me: Stiiiink… that’s what often happens!

Him: I’ll break the rules, then!

Me: What else is new.

We arrive at the house.

Him: Want to have popcorn with me on the porch first?

I look at my kid. At five foot five with size 10 shoes, he’s a man child. Part vulnerable, part defiant, 100% original. I love him so.

Me: For the record, being popular isn’t really all it’s cracked up to be. Sometimes just being with someone you love – LIKE YOUR MOTHER – is pretty awesome, too.

Him: Yeah. I guess. And, um… can I tell you something else I’ve really been thinking about? I don’t want to sound weird, but I really think I am headed in this direction.

Me: Please don’t tell me you want to wear dresses and play the flute.

Me: (Stunned) Let me get this straight: You want to be a Jew-frowed, comic book reading, wrestler? That’s your plan for popularity? 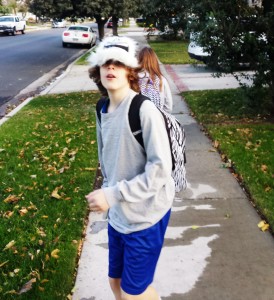 For your entertainment, I will leave you with the song that always makes me laugh. The show always reminds me, too, that being popular for a crowd never works. Being true to oneself? That’s the way to defy gravity.

Talk at you soon.

9 thoughts on “Popular… It’s All About Poppppuuuuulllar”