As a mom, I find myself constantly on that balance beam between time for me and time for my family.

On one hand, if I don’t put on my own oxygen mask first, how will I draw enough life giving breath to be of service to anyone else?

At the same time, it’s become more and more apparent to me that the purpose of life is not living and focusing on myself. The purpose is to be there for others. This doesn’t mean I can’t set boundaries, but it does mean that in losing myself, I find myself.

I’m not surprised that my new quandary has infiltrated the one area of time I have each day for myself – the gym. On one hand, I despise rising at 530 to be at the YMCA by 630. On the other hand, when I do it, I find that am more ready to face my babies at 745 for the great walk to school.

Lately, they’ve wanted to join me. “Okay, why not,” I find myself saying. After all, how much longer will they want to hang out with their mom – a stinky, sweaty one at that?

This morning, however, proved to be the most ridiculous series of events in the history of my mother/son relationship.After not being able to find his shoes, locate a sweater, or eat a piece of fruit (my suggestion to avoid him passing out on a treadmill going faster than Rosie, Judy Jetson’s maid) my son and I launched into full-blown war over his hair. 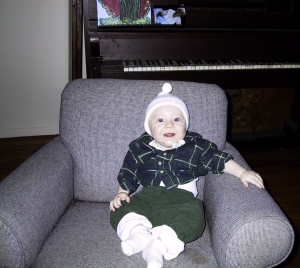 But he’s since morphed into this:

And while I’m not saying that having his hair parted down the middle in hesher/oily locks is a bad look FOR 1984 I have recently been the wee bit concerned that his style was not lending itself to his efforts to become, in his own words, “more popular.” I mean, it’s not like he plays guitar, does theatre or is donating to Locks of Love. His only intention, as of now, is to “see what happens,” attract birds to nest, or subconsciously work towards being the tween stand-in for Kenny G’s “My Teenage Musical Self in C-Minor.”

Note to self for future: Having this conversation at 6:45am when your gas tank and patience is low is not one of the brightest moves on the planet. Our conversation went like this.

Me: Stink, I love you, but I’m really wanting you to get your hair shaped up.

Stink: Actually, yes, it is.

Stink: Mooooooom, you are the only one who ever complains about my hair!

Me: I’m the only one who is direct enough to tell you!

Me: It’s a fact! You look like you need a special aid to ride the short bus!!!!!

Stink: I don’t know what that means, but I think it’s an insult, and I don’t like it!

Me: Then you can stay in the car while I work out!

Stink: Me and my hair!

And so they did. My boys. Stink and his hair. His droopy, parted down the side, no style, IT LOOKS FINE, hair.

While I walked and fumed on that treadmill, I was a mix of emotions. On one hand, I was furious and angry at my entitled man-child for  not being more neat and tidy about his appearance. On the other hand, I was so proud of him for bucking up to me. I try not to care about what others think, but years of people pleasing has made this a tough chain to break. Stink not only never had to loosen the shackle, the chains were never there in the first place. He was, and continues to be, a force to be reckoned with.

“What’s more important, Andrea?” I asked myself. “Who does your son want to be – not who do YOU want him to be?”

Being a mom isn’t easy. I am constantly having to protect his right to be an individual in the world, but desperately wanting him to fit in. Sometimes, at the end of the day, only one thing is certain. I might have less “me time” these mornings, but there’s something to be said for knowing what’s happening with my kid, even when it’s messy. Even when there’s yelling. And even when we have bad hair days.

I’ll give you the result of our feud on my next post.

Meanwhile, let’s have a little contest. Who can give his hair a name? The winner will get something special mailed to their doorstep. I promise it won’t be a hairball or a used comb.

7 thoughts on “A Hair Raising Experince”