“One of these things is not like the other…” That used to be my kids’ favorite Sesame Street song. They’d squeal with joy when one row of boxes containing 3 apples and oranges rolled by, while another box contained 3 apples and a banana. So similar, yet so different!

Perhaps you, too, can play this game with my children. 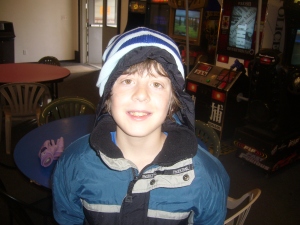 While I’m stoked to say that no one laughs at Stink for a few tics, our family finds him pretty hilarious. He really brightens our lives.

Pip finds him pretty darn funny also. She’ll even tie his shoes for him.

After all, shirtless arcade play is exhausting. Plus he’s got those 100 pens to organize in his suitcase.

The takeaway: If your kid is eccentric like mine, like Stink’s treasured Scooby Doo suitcase, you better roll with it. They only get more eccentric with time. (And thank God. It’s so much more fun.)