It was a busy weekend but a productive one as we slowly but surely put our house in order after our post-Christmas madness.  There’s something deliciously satisfying about puttering and organizing when there’s not a ton of pressing “must do’s” crowding the task. Instead of being a chore, it becomes a delight as taking the iron out of the closet results in finding that stray shoe or the random picture of Pipsqueak as a newborn sucking off my cheek for nourishment.

Rex did about ten loads of laundry. Pipsqueak did a lot of reading. I checked in on my mom whose hip is slowly healing. As a family we all took a dip in the YMCA pool during Family Swim time. And Stink played the Wii.

Many of you might recall a fierce battle played on this sucker, and it wasn’t between Stink and a first person shooting character. It was over the damn plumber, Mario. This post, along with many prior, detail our epic exchange.

My issue with Mario, and the Wii in general, was 2 fold:

1. It seemed to bring on more jerks than a political campaigning team

2. Stink’s obsession with talking about it at home, at class, in the car and with friends and family (including folk he didn’t know but could perhaps spare a few moments to shoot the shxxt about mushroom magic) was ANNOYING. It was affecting his school work, and more important, my sanity.

The final nail in the coffin arrived after one mother at school – a particularly intense woman who cooks organic, gluten free and dairy free with the same tenacity as a dog gnawing on a grass-fed cow bone – drove the point home that video games was about the worst thing a parent could give her children. Her points included many from This article (though this is not the one she gave me) as well as from this book: Failure to Connect. 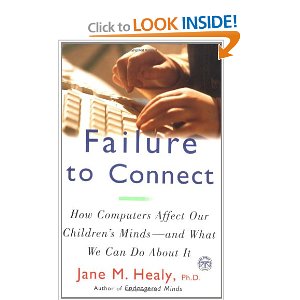 “We’re off the Wii, just like we had to take you off the DS!” I told Stink. “Your body can’t handle it!”

Stink cried, I breathed a sigh of relief, but then something crazy happened.

I’m not sure if it was the pressure from State testing. Perhaps the new Intuniv we were on for focus. Maybe the dander from some cat ten miles away that got kicked into our smog-filled Valley air and landed in his nostrils on a windy Thursday morning while he was lagging getting into our French fry smelling dirty SUV for one more day of almost being late to school. But the tics were back with a vengeance.

So it wasn’t the video games only!

And that is when, after a lot of contemplation/meditation/prayer, I decided to let Stink play the video games again.

He doesn’t have free reign. He has limits.

* Friday – One hour after school

* Saturday – One hour (with breaks in between)

* He gets a timer (a piggy timer, to be exact). He turns the little fat pink head for 30 minutes and plays. If he goes over his time, he loses out on the next 30 minutes.

* I use it as incentive to get chores done in addition to his current jobs. “Hey, Stink, I really need my car cleaned! Tell you what… spend 20 minutes cleaning out the school papers from 2009 and I’ll give you five more minutes on the Wii!” It’s an amazing bargain.

My Current Thoughts on Video Games

Stink’s tics are still minimal, so like some folk who like wine, I’d rather not throw away the baby with the bath water. Our motto: Have a glass of Mario here and there. If you start slobbering like a fool and can’t concentrate on your family and friends because you’re drunk on electronics, it’s time to detox yet again.

As for the mom who ferociously clings to her manual for non-electronic child rearing, she also followed me out to the car a few weeks ago to tell me that she was doing “Just a little research” on rubber ducks – one of Stink’ s many collections. In low and confidential whispers through my car door window, she said that some quackers have been recalled from China due to chemicals or crazy toxins or something else I could not catch because my head was spinning in disbelief over our conversation. (At least I knew now why the duck Stink had given her son as a gift – one her son had wanted – was sitting on the Welcome Mat outside her door when I went to pick Stink up from their weekly writing meeting.)

For her, no snark intended, that’s a fine way to parent. Her son is truly adorable and sweet and she is a very good and concerned mama. I have learned a lot from her. But for me, this borders on fear induced parenting. Yes, we need to keep our kids safe, but at what cost? When do we protect the body but lose the soul?

I say “Duck You” to extremity. Like my kid’s toys, if a little squeaking results from a whole lot of fun (within reason) then I am okay.

Is your child affected by video games of any kind? I would love to know.

Come check me out over at the New Jersey Center for Tourette Syndrome where this column is syndicated. Lots of awesome parents over there and kids who write about all things tic related!

* Photo on top taken of Miss L, Pip and Stink doing their signature “lice hug!” (They can be social as they want, but I can’t go through the Lice Fiasco of 2010 EVER AGAIN, nor can my husband. I think he’d rather pay the “Lice Fairy” another $200 to sit in our beat up kitchen and pull nits than hear me ruminate for hours about if RIT – the hair chemicals sold at Rite Aid and other fine over the counter establishments – does or does not induce throat clears or head nods. Who can blame him? Check out the kids. They could be cast in a Tim Burton movie!)

3 thoughts on “Videos Games and Tics – Our Experience”