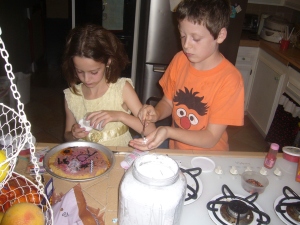 I was very sick last week, as was my daughter the week before. For us, it was all about being knocked on our butt for a few days, sniffling like crazy, dealing with a few nights of sore throat due to post nasal drip and feeling exhausted.

Stink had a sore throat on Friday and stayed home from school. Unlike the procedure for Pip and me which involves sleep and hot cocoa, I took Stink a day later to Urgent Care.

When I arrived, I was lucky enough to have the same (may I say very handsome) doctor on call. He immediately sat down on this rolling chair, flipped open Stink’s chart and began the following conversation.

Doctor Dreamy: So, Stink has a sore throat again?

Doctor: But you still want us to do a rapid strep test?

Doctor: Works for me.

Doctor: He has it.

Me: (grunt grunt grunt) But you can’t explain why?

Me: Do you think this is why, possibly, he tics? That his basal ganglia has been ravaged so many times that it simply doesn’t have a fighting chance in hell to normalize?

Doctor: Honestly, it very well could be. I wish we had answers. But I can tell you this: You’re on it.

Stink is now on penicillin, a change from his normal amoxicillin thanks to Doctor Dreamy who thought maybe, just maybe, a change would do him good.

Now back in school, Stink is his old crafty self. No complaints, no exhaustion, and still no major tics!

What do you all think about the correlation between strep and tics?

My takeaway on strep and tics: Kids who have TS have more sensitive immune systems. The better the diet (though not a cure all) and the more tailored the supplements to each child (get a good homeopathic doc) and the more sleep (8 hours at least) the less likely their immune system is to take a hit. And when the immune system does crash, be kind to yourself. (Moms and dads, you didn’t give your kids TS. You are good!)

* Photo above taken the day after our renter’s birthday when the kids helped bake a belated cake. And check it out: massive food dye on the cake, and still no tics! Vitamins? (new ones… will post later) The other supplements we are on? Natural waxing and waning of tics? Who knows! Don’t care! Will take the break while I can.

PS: Renter didn’t complain about the gluten free cake which tasted like rock sponge surprise. Nor did she mind her new skin color. We have the right gal for our house! 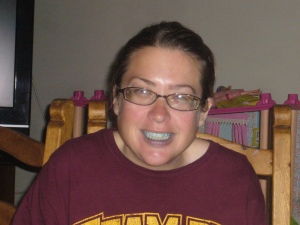 Come visit me at the New Jersey Center for Tourette Syndrome where this blog is syndicated.

Join 1,113 other subscribers
Follow Happily Ticked Off on WordPress.com
My Tweets