As I sit here typing, my daughter sits quietly behind me. She’s painting in her art center. By “art center” I mean “re-purposed 1980’s ply board shelf unit” covered in discount white paint. Her legs are crossed. Her eyes are focused. And she hasn’t moved in one hour. I’d poke her to be sure she wasn’t a statue, but in case she fidgets, I don’t want cobalt blue on my favorite thrift store cardigan.

Me? I’m the opposite of disciplined and steady. I bolt up up to take a picture. I plop down to write a blog post. I get up to get a cup of coffee. I sit down to check an email. Oh, what was that meme on Facebook? I’ll look at that really quick. And ha! That vimeo is hilarious. That cat sure knows how meow Jingle Bells like a pro. Oh, and for the record, my elf name is Perky McJiggles. Score!

By the time I’m done, I’ve got nothing accomplished but a spinning brain. My daughter, on the other hand, has a beautifully painted rainbow-colored dog which will soon house shiny new crayons. With my little Hermione Granger, this translates to magic. Precise, practical, whimsical but contained magic. With her mother, there is magic also, but things often explode.

When the kids were younger, I’d pass of my messed up experiments as “creativity!” and “mad cap hilarity!” I’d hail the virtues of being flexible and turning lemons into lemonade! But the truth is, I wasn’t (and continue to not always be) prepared for events and every day occurrences in my domicile.

Last year, I almost missed my daughter’s choir performance because I assumed the start time was the same as rehearsals, despite mounds of paperwork saying the contrary. Where was the paperwork? In the piles of everything else on my desk. I had meant to file it, but somehow, that resolution never took off from its first inception.

This has all started to change since my job ended in October. I’m getting more organized. I have to be. Not only is my family worth it, but so am I. Where do I want to work next? What do I really want to write? WHO THE HECK AM I? The verdict is still out, but I can promise one thing: As long as I’m reacting to life, rather than producing it, I’m only going to get half measured results. I need to be intentional.

Living on purpose is kind of like living life sober. It’s got a lot of potential. You know things are going to be really exciting. (Not as exciting as making anatomically correct gingerbread men with your bff-  half a bottle of Two Buck Chuck in – but exciting none the less.) In the meantime, however, it’s kind of painful. I mean, ouuuch. Life is so… real. And complicated. And this time of year, it’s so MERRY! And BRIGHT! For Godsake, the emotional and literal piles seem so overwhelming. Can’t we just shut the curtains?

In many ways, when the kids were younger, things felt more peaceful. Less was expected of me. I could enjoy the last minute walks to the gas station for Diet Coke. If I wanted coffee instead, but I didn’t have milk, I’d borrow some from a neighbor. If a friend popped by, we could hop in the car and grab coffee at the local Starbucks. A few hours could pass as we shared our hopes, dreams and struggles with everything from parenting to views on faith. Heck, sometimes we would even end our night with a glass of wine. Or three. So what if it was Tuesday! We were spontaneous! And Lord knows it was more fun than filing that stack of papers.

Things are not like that anymore. I no longer imbibe in the evenings. It’s my own spirit I infuse, and wow, what great books I’ve been enjoying!

Healing is a Choice, Steve Arterburn

While I’m on a faith and memoir kick now, I can just as easily slip into a romance or adventure series. A good book is a reminder that a world outside of my own self-centered thinking exists. I can travel to heaven, the slums of Africa or around the table of a tired mother and her preacher husband.

Words, read from a space of my own (in this case my trusted green couch) remind me that there is redemption in the dishes and the laundry. That there is a grace to our days, a rhythm to our sometimes ho-hum lives. A break in routine from the daunting to-do list and “please oh please hire me” job searches.

I used to read so I could be a better writer. But now I read to be a better Andrea. Because at the end of the day (or the beginning as is so often the case) there’s nothing I love more than putting down my books and embracing these two people.

Until next time, I’d love to know if you have a space of your own to be inspired. 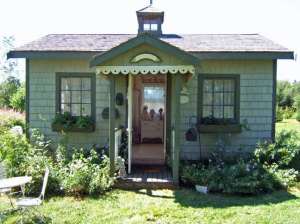 What I’ll have to settle for in the meantime is something secluded like this: 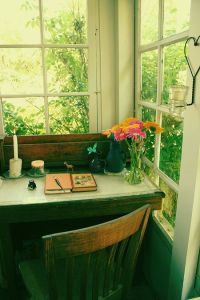 Because this space is already taken. 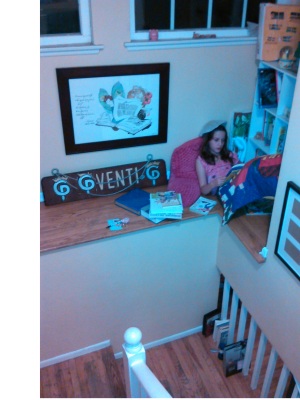 Does anyone want to commit to designating a space for ourselves to be inspired in 2015?

Find me at Twitter @AndreaFrazer. I’d love to  hear from you!