In his book, A Million Miles in a Thousand Years, Donald Miller chronicles his journey from apathy to outrageous purpose and joy. Per the website link above:

After writing a successful memoir, Donald Miller’s life stalled. During what should have been the height of his success, he found himself unwilling to get out of bed, avoiding responsibility, even questioning the meaning of life. But when two movie producers proposed turning his memoir into a movie, he found himself launched into a new story filled with risk, possibility, beauty, and meaning.

A Million Miles in a Thousand Years chronicles Miller’s rare opportunity to edit his life into a great story, to reinvent himself so nobody shrugs their shoulders when the credits roll. Through heart-wrenching honesty and hilarious self-inspection, Donald Miller takes readers through the life that emerges when it turns from boring reality into meaningful narrative.

Miller goes from sleeping all day to riding his bike across America, from living in romantic daydreams to fearful encounters with love, from wasting his money to founding a nonprofit with a passionate cause. Guided by a host of outlandish but very real characters, Miller shows us how to get a second chance at life the first time around. A Million Miles in a Thousand Years is a rare celebration of the beauty of life.

In reflecting yet again on this book, I am convicted in the truth our own life stories must be full of heroes, journeys and daring adventures. Unlike the movies, however, we don’t get to sit back from the comfort of our chairs and watch the hero. We get to be the hero, and that’s something entirely different, isn’t it?

Watching the hero you get to say, “Oh, wow, that action scene was epic! The special effects were awesome, and hair stayed perfectly coiffed, even during the knife fight!”

When you are the hero, suddenly the action is much more intense. You can’t rely on a trail guide. You have to bring your blade, cut down branches, forge new paths, cross scary rivers, and go face-to-face with giants. That’s not thrilling and inspiring. It’s not invigorating. It’s terrifying.

But mamas, isn’t this what makes you a hero in your child’s life? Regardless of circumstances, you bolt out of bed every day – ready to fight dragons? Sometimes you have someone at your side. If you’re lucky, someone’s left you an old tattered map. But oftentimes, you jump into the abyss with nothing but your brain, your courage and your big beating heart.

These days, I’m feeling less than courageous. I’m not one bit terrified of the T.S. beast. I mean, not one bit. Instead, I’m feeling defeated as to the motive behind my book. As I’ve said to a few of you, I wrote this book when I was knee deep in the pain and gunk and exhaustion of battle. But I have to ask the question – Did I do it for my own healing? To pat myself on the back and say “Hey, wow, good job, Mama! You sure are raising a great kid!” or did I do it for others?

Without a doubt, this website is for you lovely ladies. It’s meant to be a love letter for other soldiers in the fight. But the book? I’m not sure.

Feedback from others has been wide and varied, but since I’m down, I’m focusing on the less than exciting. As at least 5 people who’ve read it pointed out that throughout the narrative I make it clear that Stink is fine – – that it’s me with the problem. This leads to the question, “What is the book about then? T.S.? My marriage? Coming to terms with my fears?”

I really need your response, readers. What would you most want to read in a book about T.S.? Because I’m at the point where I’m just ready to give up on it and just blog here. I might just let it be something that I wrote to get me through a time with my kid that was scary, but now that is in the past.

I’m honestly just done with the whole, “My kid has T.S.” thing. I need more, “My kid is Stink” and this is how I parent HIM. And my daughter! Hey, I have a daughter, too!

I’m starting to think this whole T.S. theme is too exhausting and that maybe God has a different plan for my writing.

Any insight would be helpful. I fully admit, now, I’m tired and a bit emotional, so I will let this digest and get to my notes next week. 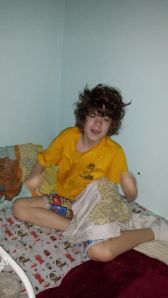 11 thoughts on “On Being Brave”