For those of you who read me, you know that the Nintendo DS proved to be an absolute nightmare on many levels. Stink would obsess about when he could play it next. He’d make the finger movements in class when he should have been working on his writing assignment. He’d make the ever lovely Tarzan “ah ah ah” warble. His eyes would dart up down and round and round like a mad scientist tic-toc clock buzzed on Red Bull.

It didn’t matter how many expectations we’d set in order for him to play the game:

While I am not a mother who frets over my child’s self-esteem when it comes to doling out uncomfortable consequences (sorry, that’s life, kid) – I found it heartbreaking when I knew from the start he couldn’t control his impulses due to the very machine he was jonesing to play.

We found ourselves in a constant no-win circle. I likened it to telling a junkie they could have a shot of heroin only if they were able to meditate for an hour each day once/week and gain ten pounds back in the process.

It just so happens that I had enough of this Mario D.S. right around the same time the school administration informed us about starting an I.E.P. evaluation for Stink.

Stink cried to mama when I told him that his hand held would be gone by Thanksgiving.

Mama cried to Papa when she was convinced Stink would be labeled as a special needs problem child by Christmas.

Along with the extra emotions and tics that come with Trick or Treat… it was a fun Halloween season at he Frazer domicile.

We all got over ourselves around the time we moved the Christmas tree into the living room late November. The lights on the tree seemed to illuminate the best thing to happen in our house since Mario moved out: Sanity.

You can imagine my dismay, then, when Papa recommended that Santa buy Stink a Wii.  After smacking Rex over the head with a yule log,  I agreed. It made sense that the bigger screen and inability to transport that damn little box from place to place might dissipate tics and hyperactivity. We could buy movement games in addition to his beloved Plumber Lover.

I did provide a caveat though: If it caused any of the same symptoms as the DS, it was going to end quicker than Kim Kardashian’s wedding.

One month in, I’m happy to report that we have seen ZERO of the side effects we’ve seen with the DS. Stink still rushes to play his beloved Mario right after school on Fridays (no screen time during the week) but he’s fine with his 2 hour minimum.

His game time is tied into good behavior at school and home. So far, he’s doing phenomenally.

(Well, he still finds it hysterical to take pictures of his mother’s ass, such as this classic from Christmas Eve, but he’s 9. I’m into refining him into a nice young man, not a saint.) 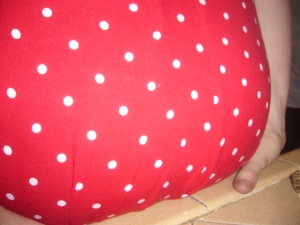 In even stranger news, we finally heard back from the school about the I.E.P.. Turns out he doesn’t qualify based on high academic test scores and a fine enough ability to interact with others. He’s quirky. He’s odd. He’s stubborn as hell. He needs to curb the interruptions. He spaces out. But he doesn’t need an I.E.P.

I’m telling you, without even joking, that I I’d bet dollars to gluten free doughnuts that this I.E.P. process never would have gotten started if we hadn’t given him that D.S. in the first place last holiday season.

Of course, one will never know, but I’m relieved to know what our path is now. We have a few choices: