It’s been insane….Showing up at different schools… Sometimes I’m a P.E. coach, sometimes a choir teacher. Sometimes I’m a math teacher. Other times a science or robotics instructor. Translation for all this: I take roll and make sure the kids don’t kill each other.

In addition I’m doing my writing class on Saturdays. Am I doing too much? Of course. But when is it ever a good time to go after my dream? It turns out that being put on as “head writer” on another person’s script didn’t go at all how I planned on Saturday. (Big shock.) I mostly just sat at the table while the big producer who is teaching the class did all the talking. I contributed one big idea that was accepted. The rest? Not so much. (I could swear that he looked in pain when I spoke most of the time. Note to self: Keep it brief.)

Now I’m assigned to work with the show creator as well as an Improv person to take this script from the first draft to the show runner’s direction. Can I do this? I don’t know. Do I care? Yes. Will I freak out if it doesn’t go? Not really. It’s a crap shoot in the end. All I can do is my best.

“It’s going to go to Big Actress A,” the producer says.

That would be nice. But in the meantime, I have to show up at public school and keep kids from riding the shopping carts full of old P.E. equipment while I take attendance.

I have to cook dinner and do shopping and hope my son’s size 15 (yes, you heard that right) SIZE 15 black rainboots arrive in time for Halloween for me to paint bright red with sparkles.

No he is not going as Captain Underpants. He is going as Papyrus from a videogame, Undertale. He will have two sidekicks – Miss L the ever present neighbor girl and Amber, a girl he’s known since he was 2.

Have I cured Tourettes? No. Is he trick or treating with two beautiful girls as well as making additional plans to hang out with his “friend” from school – a 17 year old Junior girl? Yes.

It’s like this script I’m writing… and figuring out my career… I don’t know where it’s all going, but God does, and that’s enough.

Oh, I did get a residual check today for my book. I think after royalties I’ll make $14.00. Woo hoo! I’m on fire! If any of you readers ever visit L.A. I can buy you a Starbucks. If 14 of you come by I’ll take you McDonalds for a dollar coffee. I know. I’m generous.

Well, I’m off to call my mom. And crash. Tomorrow starts early and I have middle schoolers to wrangle, a house to clean for 3 writers who are going to revise a script in my office upstairs, and a pit bull to be sure has peed before she jumps out of our living room window screen to urinate on a squirrel. (Yes, that’s a thing.)

How’s your dreams happening, people! As Mark Batterson writes in a book I’m reading now, “If your dream doesn’t scare you, it’s too small.”

Last month, I was ready to vomit. Now, I’m just kind of doing it. I’m tired, but doing it. And that feels so much better than thinking and projecting. God is in the action. I take the steps and leave the results to Him. It’s less pressure.

What are the dreams that scare you? I want to hear! Leave a comment! 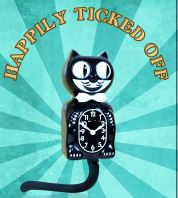 Find me at www.happilytickedoff.com! I'm a produced television, magazine, newspaper and national blog writer available for freelance writing in the areas of faith, parenting, lifestyle and healthcare. In addition to ghostwriting and content creation, I am proud to be publishing my first book. Called "Happily Ticked Off," it is a humorous mom-moir about raising a son with Tourette Syndrome. I can best be described as Erma Bombeck meets Nora Ephron. I live to connect with others through writing, authenticity and just a wee bit of sass. View all posts by Andrea Frazer